Just saw this on Facebook and asked it to be shared, so please do. 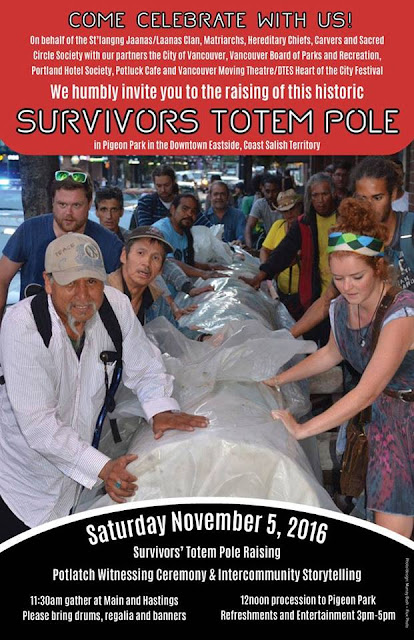 Taking place on the Unceded lands of the Musqueam, Squamish & Tsleil-Waututh peoples.

Come Celebrate With Us!
On behalf of St'langng Jaanas/Laanas Clan, Matriarchs, Hereditary Chiefs, Carvers and Sacred Circle Society with our partners the City of Vancouver, Vancouver Board of Parks and Recreation, Portland Hotel Society, Potluck Cafe and Vancouver Moving Theatre/DTES Heart of the City Festival...

We humbly invite you to the raising of this historic:
SURVIVORS TOTEM POLE

From the Georgia Straight:
Totem pole honouring survivors of injustice in Vancouver to be raised in Pigeon Park
by Carlito Pablo on June 22nd, 2016 at 3:50 PM

Work is currently being completed on the monument carved by master carver Bernie Williams, known by her Haida name as Skundaal. SACRED CIRCLE SOCIETY

A monument will be installed in the Downtown Eastside of Vancouver to pay tribute to people who have defied racism and other forms of injustice.

The 27-foot totem pole by master carver Bernie Williams, known by her Haida name as Skundaal, will be raised in Pigeon Park.

The installation will be held on November 5 as a highlight of the Heart of the City Festival this year.

According to a report by city staff for the Vancouver park board, the project is significant because of the changes happening in the Downtown Eastside.

“This project provides an opportunity for the long-time residents to express the importance of honouring the many people who have arrived and lived in this community as survivors, and also allows newcomers to reflect on the beauty and poignancy of that survival,” the report notes.

In the report, staff recommended the allocation of $50,000 for the installation of the Survivor’s Totem Pole.

The totem pole project is an initiative of the Downtown Eastside-based Sacred Circle Society, and the Vancouver Moving Theatre.

According to Wendy Pedersen, a member of the board of Sacred Circle Society, work is being completed on the totem pole.

“It’s going up finally,” Pedersen told the Straight by phone. “We’ve been working on it for a couple of years.”