Well it was a strange morning, and not to get side tracked and I wish I had done a screen capture because the Vancouver Sun posted a tweet about the Royal blog and it had photos with credits saying that Grand Chief Stuart Phillip was at the Ring of Reconciliation- but those links, that I pointed it out mysteriously disappeared...or I am mistaken...

(Updated)Hey, guess what I found that image. It was on this page.
This is NOT Grand Chief Stuart Phillips.  Scroll down through the blogs...
http://vancouversun.com/news/local-news/the-royal-blog-william-kate-and-the-kids-arrive-in-victoria 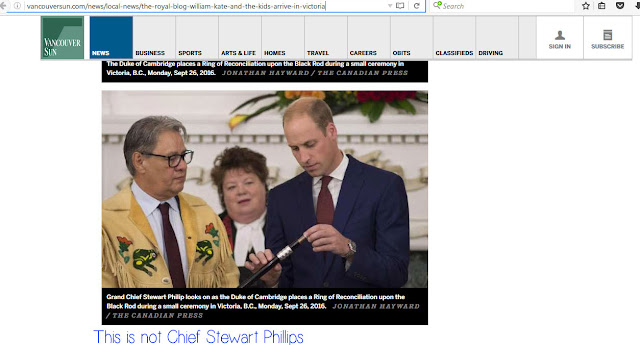 "Doubtless the apparatchiks of protocol in the premier’s office found it easy to recruit a stand-in for the absent grand chief. Alas, spin-doctoring, however proficient, can’t varnish the simple but powerful message."

Anyways the point is there's a lot of mistruths and so mistrust.
But they came through here with this article by Stephen Hume.

This article is excellent and I hope you will all read it.

Stephen Hume: The history behind the royal snub

It dropped a protocol bombshell just as Prince William and Premier Christy Clark headed off to Bella Bella and the Great Bear Rainforest where, ironically, the province had earlier snubbed the Central Coast Regional District, one of the few elected non-First Nations governments in Canada boasting 80 per cent of its council elected from First Nations, by refusing it an invitation."


"Phillip was to hand a “ring of reconciliation” to Prince William, the Duke of Cambridge, and then invite him as the Crown’s official representative, to affix it to the Black Rod of the legislature.

The Black Rod, adopted by B.C. in 2012, is a medieval symbol of the authority of Canada’s reigning monarch. Made from the wood of seven indigenous B.C. trees, it’s embossed with silver, jade and a British gold sovereign from 1871, the year B.C. became a province — and began trashing First Nations rights. Three silver rings represent the Crown, Canada and B.C. The fourth ring to be affixed represents the province’s First Nations. Reconciliation is a worthy goal."


"The UBCIC listed examples: fast-tracking the Site C dam over First Nations concerns — instead of consultation and negotiation a desire to ram it beyond the point of no return; “stall-and-litigate” tactics over fishing rights; pipeline rights-of-way and locations for liquefied natural-gas plants that don’t reconcile First Nations objections; deepening poverty — 48 per cent of First Nations children, almost three times the rate for non-aboriginal children, and B.C. still has no coherent poverty reduction plan — and ongoing negligence regarding aboriginal child-welfare policies."
READ FULL ARTICLE HERE

"Look, a long-term abusive relationship in which there is a vast asymmetry in power between the abuser and the abused can’t be reconciled simply by making nice in public while it’s business as usual in private."

"British Columbians want and deserve genuine reconciliation. Political theatre and promises of better times tomorrow don’t cut it. The UBCIC is honest. That’s the unvarnished take-away from this protocol protest."